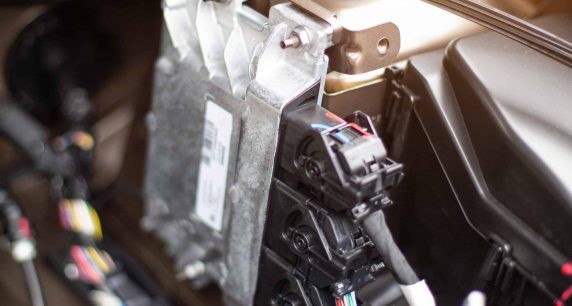 Today’s vehicles rely upon a complex communication network to facilitate proper operation. This network features an array of terminals, wires, and sensors, all of which feedback to varying electronic computer modules. In the vast majority of cases, each of a vehicle’s vital systems features a controlling computer module.

One such module, which is found on virtually all of today’s vehicles, is the BCM, or body control module. This module is tasked with supporting a number of safety and comfort related functions, which provide immense value to a vehicle’s driver, and additional occupants.

However, though rare, a vehicle’s body control module can exhibit severe operational issues, up to and including complete failure. When this occurs, several troubling symptoms can present themselves, of which many can be quite troubling to contend with.

WHERE IS A BODY CONTROL MODULE LOCATED? In the vast majority of vehicles, the body control module can be found beneath the dashboard. This tends to be a fairly standardized location, with most modules of this type being located within close proximity to this area.

However, the exact side on which the BCM is located (driver/passenger), varies from one model of vehicle to the next.

In certain instances, accessing the BCM can require partial disassembly of the dashboard and surrounding trim itself. Luckily, doing so can often be done with minimal hardship, as many dash-related components are assembled with little more than push-style clips.

There are a number of signs associated with body control module failure. However, some of these symptoms tend to be far more prevalent than others, though it is important to familiarize yourself with each in the event that you are faced with a fault of this type in the future.

The following are several of the most common symptoms associated with body control module failure.