Diagnose: Why Won’t My Car Start 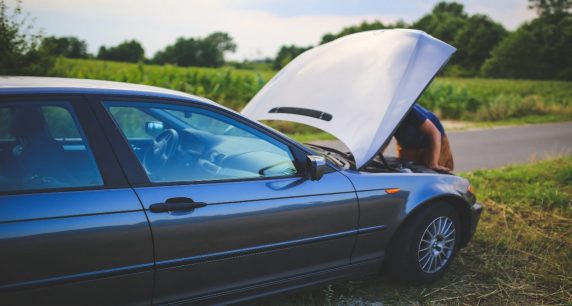 If your vehicle won’t start, it’s usually caused by a dying or dead battery, lose or corroded connection cables, a bad alternator or an issue with the starter. It can be hard to determine if you’re dealing with a battery or an alternator problem. Here’s how to know which one is the issue. The battery’s usually the main issue behind issues with starting your car. In fact, battery problems were the main that wouldn’t make the car start.

There are a few ways your battery might go flat or even die:

If the car makes a rapid clicking sound when you turn the key but won’t start, it could be the battery. A jump start might get you going again but you may need to replace the battery or have a mechanic check it for problems and corrosion.

Battery problems are particularly likely to happen in cold weather, when the battery gets cold and struggles to hold its charge.

Almost of the cars we see that won’t start have a problem with the starter motor. The starter motor is connected to the car’s battery and sets the engine in motion when you start the ignition.

A symptom of a faulty starter motor might be a loud click when you try to turn the key in the ignition. If there’s a problem with the starter motor, a mechanic will need to check it along with the car’s electrical system. For non-starting cars we attended had an electrical problem or an issue with the wiring. These included issues with the fuse box, with battery cables or with the body control unit.

Problems with the mechanics of your car’s engine can stop the car from starting. The main culprits are usually the crankshaft or the timing belt and timing chain. This could be the problem if the engine won’t turn over or starts and stalls.

Sometimes, your car’s security system might actually stop you from starting the car if it doesn’t recognize your key. This might be because the battery in your key fob’s low. Alarm and immobilizer issues make up nearly 3% of the breakdowns we see.

Try holding your fob right against the start button or try a spare key. If it’s still not working or you don’t have a spare, you might need to get a new key.

Alternator problems are responsible of the cases a car that won’t start. They include issues with the alternator drive belt and the wiring.

The Alternator supplies the electricity needed to operate the lights, radio and heating. It also charges the car battery.

Problems with the engine intake include faulty fuel injectors, throttles, and fuel pressure regulators and sensors. If you struggle to start the car and have also noticed a whining or sputtering from the car recently, it could be a problem with the fuel system.

If you can’t turn the key in the ignition, the steering lock might be jammed. This can be caused by a wheel pressing hard against a kerb or by parking with the steering wheel in full lock.

You can try these steps to free it up:

You can often free a jammed lock yourself without needing a mechanic.

A common issue is a flooded petrol engine. This happens when the engine’s switched off too soon after being started from cold. The unburned fuel which entered the engine remains there after you turn it off. That wets the spark plugs and makes it hard to restart the car.

It could be a flooded engine if you hear a very fast cranking sound when you turn the key (usually a ‘whirring’ sound). You might also notice a strong smell of petrol or the car may start briefly and cut out again.

If you’ve run out of Ad Blue, you won’t be able to restart the engine. You may have to call out a mechanic as some car models need software to restart them.

It’s easy to avoid running out though – your car will show you a warning with a countdown on the dashboard to give you time to top up.