Flywheel Vs Flex plate: What Are the Differences?

Home » Flywheel Vs Flex plate: What Are the Differences? In today’s blog, we’re studying the difference between a flywheel and a flex plate. We’ll also throw in some tips on how to tell when these components are in need of maintenance.

WHAT IS A FLYWHEEL AND ITS PURPOSE?

Let’s start with the flywheel. This is a heavy circular metal plate found in your car’s transmission. It’s used primarily for manual transmission vehicles, and performs three vital functions. The first is to give the clutch a surface that it can grab onto. The second is to give additional weight that adds to rotational inertia within the engine. The final purpose is to give much-needed gear teeth that the starter motor connects to and gets the engine moving from the moment you turn the key.

The flywheel can be found bolted to the output of the engine, and the wheel turns along with the crankshaft. Its surface is what your clutch mates to, and the flywheel is also a critical device for the storage of rotational energy. While the energy source is not continuous, the flywheel turning keeps a constant supply.

When you press on the clutch, the throw out bearing comes into play, pushing in and forcing the pressure plate away from the clutch disc. Without that pressure, the clutch is no longer getting engine power, which is the condition that you need if you want to shift gears without damaging the transmission.

WHAT IS A FLEX PLATE AND ITS PURPOSE?

A flex plate is also a heavy, circular metal plate that you will find as a key part of your car’s transmission. One difference here is that flex plates are typically used in automatic transmissions. Their primary function is to connect the output of the engine to the torque converter, which serves the same purpose as the clutch in an automatic car. 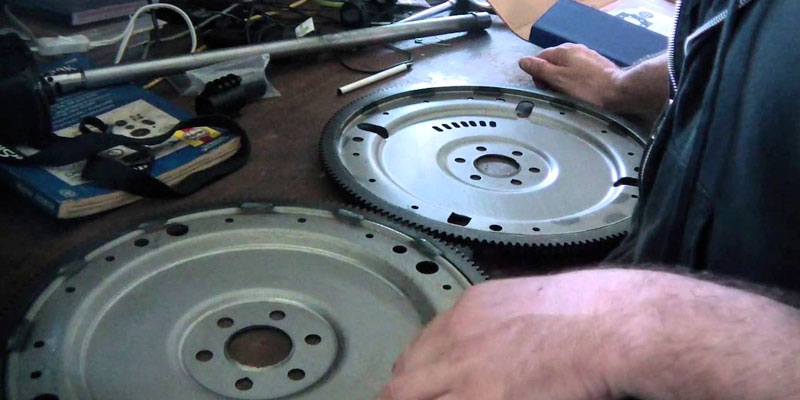 Similar to the flywheel, the flex plate has teeth around the outside that the starter motor uses to get the engine moving from a standstill. Already we can start to see the similarities and differences emerging. Since their main function is essentially the same, it’s easy to see why people do sometimes use these words interchangeably. However, there are many important differences that we will discuss in more detail in the next section.

WHAT ARE THE DIFFERENCES BETWEEN THE TWO?

They are similar in overall shape and function, but the flywheel and flex plate come with a number of important differences.

The flywheel is found primarily in vehicles that have a manual transmission, whereas the flex plate is found in automatic transmission vehicles.

Both of these components are typically heavy, but the flex plate is much thinner and therefore lighter than the flywheel. This is because the flex plate, as the name suggests, needs to flex across its main axis as the rotational speeds around the torque converter change.

The flywheel is typically cast or billet, and besides being noticeably thicker and heavier, it’s also characterized by its large, smooth surface that is ideal for the clutch’s friction disc to make contact with. The physical differences are very big, even though the basic round shape and toothed edges are similar.

One other key difference between the two is the bolts that come attached to them. Flex plate bolts are typically longer and come with a larger flanged head. Flywheel bolts also typically have star-shaped washers and don’t have the flanged head. If you were to try and use the bolts interchangeably, then you might do some damage to the lip of your oil pan depending on the vehicle. 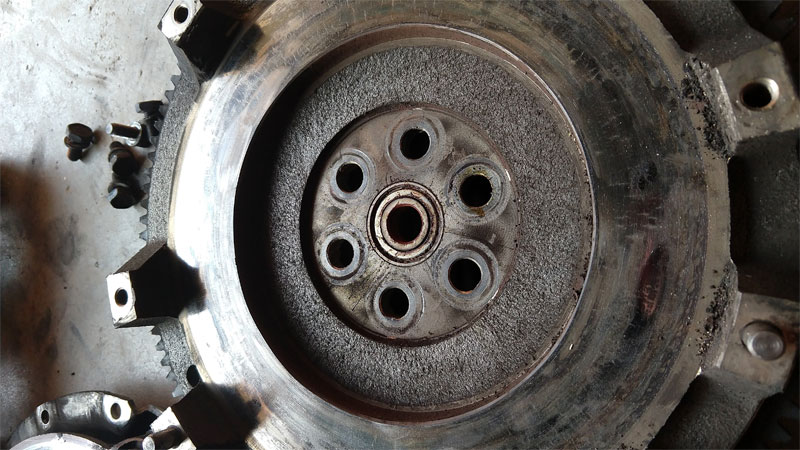 SIGNS OF A BAD FLYWHEEL

There are three main signs to look out for that indicate that your flywheel might be in need of repair or replacement.

Sign 1: Gear Slippage – This can happen for a number of reasons and refers to when you find yourself unable to keep the car in a gear you shifted into. It “slips” back into a lower gear. You’ll know that the flywheel is causing this by taking a look at the quality of the transmission fluid (or by pairing it with other signs mentioned below). If the transmission fluid appears to have metal shavings in there, it’s a classic sign of plate grinding that’s resulting from gear slippage.

Sign 2: Burning Smell – Do you smell something that reminds you of burnt toast? This could be the plates grinding together as your flywheel is causing problems like gear slippage. The smell of burning is usually one of the first things people notice when the flywheel is experiencing problems.

Sign 3: Clutch Vibrations – Do you sense any strange vibrations happening when you’re pressing on the clutch? They could be the result of a failing spring mount mechanism on the flywheel. Vibrations are a serious problem because if that mechanism is really failing, then the performance of your flywheel is already seriously impaired.